Home » JÈRRIAIS BOOKS » The Toad and the Donkey 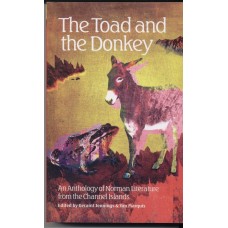 The Toad and the Donkey

The Toad and the Donkey brings together texts in the Norman languages of the Channel Islands, along with other texts that illustrate the tangled linguistic heritages of what Victor Hugo, in exile in the Islands from 1852 until 1870, called pieces of France fallen into the sea and picked up by England. In 1066 William the Conqueror and his troops, including Channel Islanders, brought the Norman language to England by force and claim of succession, but in the twenty-first century, Norman voices still express the special cultures of these remnants of the Duchy of Normandy. From Jersey’s earliest known poet, the twelfth-century Wace, who was the first to introduce the Round Table to Arthurian legend, to the inspirational nineteenth-century revival in Guernsey and Jersey, as well as writing from the twentieth and twenty-first centuries, The Toad and the Donkey explores themes such as economic expansion across the Atlantic to North America and elections at home; love and limpets; witchcraft, war and women’s emancipation; slave-trading and seaweed. For the first time, texts from Jersey, Guernsey, Alderney and Sark have been selected and translated in order to illustrate how writers from the Islands have been inspired by each other, and by overseas influences. This literary tradition has been neglected, fitting neither into the comfortable categories of British literature nor French literature, but like the Channel Islands themselves, sitting somewhere in the currents which flow between both.