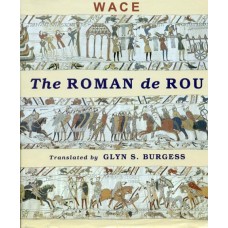 We read in the Gospel according to St Matthew - "A prophet is not without honour, save in his own country, and in his own house ". So it is with Wace. He was born in Jersey, but little has been done by his compatriots to acknowledge the major contribution to the literature of the Middle Ages by one of Jersey's greatest sons. Indeed, but for the tablet erected in the Royal Square by La Société Jersiaise in 1923, there would be virtually nothing to remind us of the Island's most distinguished poet. La Sociétéis greatly to be applauded for this important initiative in commissioning the first complete translation into English by a noted medieval French scholar of a work which would otherwise remain largely inaccessible.

The Roman de Rou is of course written in the literary Norman-French of the age, and not in Jèrriais. But for Wace, as a native of Jersey, Jèrriais must have been his maternal tongue. As a boy he must have breathed the salt air, seen the waves crashing on the rocks, and developed the love of the sea that is evident from his writing. Despite being sent to Caen at an early age for schooling and further education, Wace had inherited, or had had time to imbibe, the sturdy independence of character that is the hall-mark of our island race.

This translation of one of his most important works, and the introduction that precedes it, will help to revitalize the memory of and to rekindle interest in one of the renowned scholars and poets of his time. It offers a further reminder of the historical but continuing ties that bind us to Normandy. I commend all those who have played a part in bringing this enterprise to fruition.