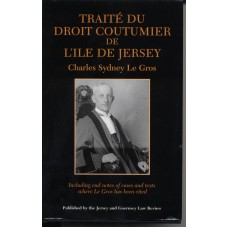 The Traite du Droit Coutumier de L'Ile Jersey was written more than 60 years ago but still contains important passages and references which are of value not just to the researcher and legal historian but also to practising lawyers. It was the work of a lifetime. Le Gros was a a serious scholar who devoted much of his time to studying the customary law and relating it to the jurisprudence of the day. He was an advocate in private practise and later became His Majesty's Vicount, a public official with wide responsibilities. The viscount not only executes the orders of the Royal Court but also acts as the Official Reciever, Public Trustee and Coroner.

This facsimile edition of Le Gros' work is supplemented by end-notes compiled by Timothy Hanson and Jean-Marie Renouf. The end-notes provide a brief update on the law in some areas, and contain references to those cases before the courts, and articles in the Jersey Law Review, where Le Gros has been cited. An index compiled by the late Oliver Mourant, écrivain, has also been included.