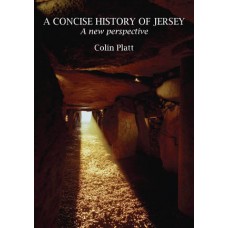 A Concise History of Jersey

'The Ariel French war steamer', wrote Colonel John Le Couteur in 1860 'came from Carteret to St Cathrine's in fifty-eight minutes last week'. And Jersey's close proximity to mainland France has defined the Island's history from the beginning. At one end of history, Ice Age hunters, crossing by land from Normandy,  sheltered from the cold in the caves of St Brelade; at the other , German forces occupied the Channel Islands on Hitler's whim, expecting to recruit supporters for the Reich. This book is about strategies often made elsewhere. But it also tells the story of a hardy island people who, left to their own devices, have re-invented themselves sucessfully many times. Farmers and fishermen, smugglers and privateers, stocking-knitters and cider makers, boat- builders and shipowners, hoteliers and cattle-breedes, lawyers, accountants and custodians of private wealth: what next?