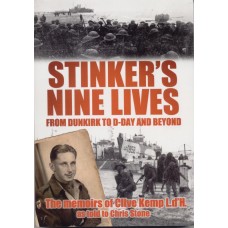 From Dunkirk to D-Day and beyond

He lied about his age to join up, and left his island home. Jerseyman Clive Kemp's war took him to Dunkirk, the London Blitz, Pegasis Bridge on D-Day, the Falaise Gap, Eindhoven and across the Rhine. For years afterwards he told no one what he had seen. Now for the first time he relives what it was like to escape from the Germans in the evacuation of Dunkirk, to dig for unexploded bombs and to see many of his friends killed - as he helped liberate Europe by building the bridges which paved the way to victory.

"The women were kissing us, which of course we didn't mind; we were heroes to them. But to me the heroes were the ones who we left in France. We were just the lucky ones." - Clive Kemp