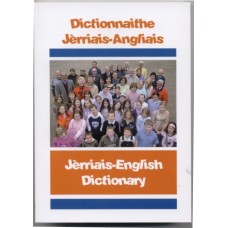 This handy compact dictionary is the second edition of the first comprehensive dictionary of Jersey's own language to be produced for English-speakers. It is primarily intended to be useful, rather than over-scholarly, and to help as many people as possible use Jèrriais in the future as well as understand the wealth of literature written in the past.

This dictionary has not been recently created – it has been built on the long tradition of lexicography that has gone before. The bulk of the current dictionary is a revised version of the English-Jersey Language Vocabulary (Carré, 1972, in collaboration with Frank Le Maistre and Philip de Veulle). This in turn was based on the extensive research by Frank Le Maistre which culminated in the monumental Dictionnaire Jersiais-Français (Le Maistre, 1966), which included consultation of the Glossaire du Patois Jersiais, based on manuscript glossaries dating from the 19th century, and the work of Philippe Langlois, Augustus Le Gros and Thomas Gaudin and published in 1924; and the Glossary of Jersey French ( Spence, 1960). Other works consulted during our research were A Brief History of Jèrriais (Spence, 1993), Les Preunmié Mille Mots (Soc. Jers., 2000), Jersey Norman French (Jones, 2001), and Jèrriais: Jersey\'s Native Tongue (Jones, 2003).

In order to supplement the basic material imported from the English-Jersey Language Vocabulary and make it as useful as possible for Jèrriais-speakers and others in the 21st century, many of the English definitions have been revised and modernised and variant spellings have been listed separately for ease of use, and the following additional materials have been incorporated:

Items and definitions from the Dictionnaire Jersiais-Français that do not appear in the English-Jersey Language Vocabulary.
Words attested in literary texts, other written texts such as newspapers, and oral and broadcast sources that do not appear in either the Dictionnaire Jersiais-Français or English-Jersey Language Vocabulary.
Neologisms, new words developed after research and scrutiny and used in modern situations.
Place names, personal names, chemical, ornithological, botanical and ichthyological vocabulary.
Additional grammatical forms of verbs, nouns, adverbs conjugated regularly from lexis referenced in existing lexicographical sources.