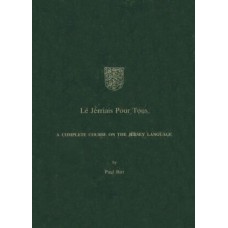 The Jersey language (or Jèrriais) has been the traditional vehicle of thought and speech of the Jersey people over a period spanning more than a thousand years. Although perhaps still relatively unknown outside the Channel Islands, Jèrriais, together with its offshoot in Sark and its nearest other relative in Guernsey are, like the Celtic languages, part of the living linguistic heritage of the British Isles.

Jèrriais belongs to the insular branch of the \'parlers\' of Western Normandy and has much in common with those of the Cotentin. It is therefore a Romance language and one of the many varieties of the langue d\'oil which have survived to the present day alongside standardised French. It developed from one of the Gallo-Roman dialects brought to Jersey during the pre-Conquest Norman era and, characteristic of western Norman it contains many maritime and agricultural terms of Norse origin brought by the Viking settlers into Normandy. Historically, then Jèrriais shares the same roots as the language spoken by William the Conqueror and Maistre Wace, the famous Jersey-born poet and author of Le Roman de Rou. It also shares the same origins as Anglo-Norman spoken in Great Britain over a period of three centuries following the Norman Conquest. But although modern Jèrriais echoes many of the features of the earlier Norman Language, it has of course like all languages evolved over the centuries and today presents us with a distinctive form of speech which can be said to belong to Jersey alone.